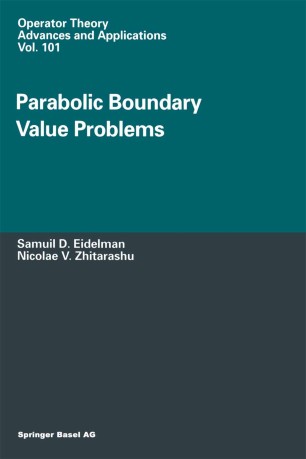 The present monograph is devoted to the theory of general parabolic boundary value problems. The vastness of this theory forced us to take difficult decisions in selecting the results to be presented and in determining the degree of detail needed to describe their proofs. In the first chapter we define the basic notions at the origin of the theory of parabolic boundary value problems and give various examples of illustrative and descriptive character. The main part of the monograph (Chapters II to V) is devoted to a the detailed and systematic exposition of the L -theory of parabolic 2 boundary value problems with smooth coefficients in Hilbert spaces of smooth functions and distributions of arbitrary finite order and with some natural appli­ cations of the theory. Wishing to make the monograph more informative, we included in Chapter VI a survey of results in the theory of the Cauchy problem and boundary value problems in the traditional spaces of smooth functions. We give no proofs; rather, we attempt to compare different results and techniques. Special attention is paid to a detailed analysis of examples illustrating and complementing the results for­ mulated. The chapter is written in such a way that the reader interested only in the results of the classical theory of the Cauchy problem and boundary value problems may concentrate on it alone, skipping the previous chapters.