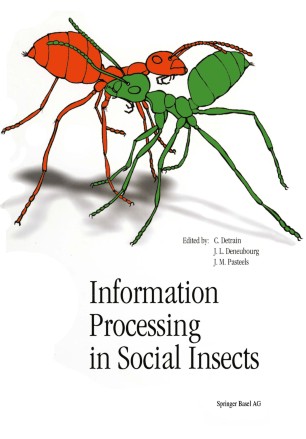 Claire Detrain, Jean-Louis Deneubourg and Jacques Pasteels Studies on insects have been pioneering in major fields of modern biology. In the 1970 s, research on pheromonal communication in insects gave birth to the dis­ cipline of chemical ecology and provided a scientific frame to extend this approach to other animal groups. In the 1980 s, the theory of kin selection, which was initially formulated by Hamilton to explain the rise of eusociality in insects, exploded into a field of research on its own and found applications in the under­ standing of community structures including vertebrate ones. In the same manner, recent studies, which decipher the collective behaviour of insect societies, might be now setting the stage for the elucidation of information processing in animals. Classically, problem solving is assumed to rely on the knowledge of a central unit which must take decisions and collect all pertinent information. However, an alternative method is extensively used in nature: problems can be collectively solved through the behaviour of individuals, which interact with each other and with the environment. The management of information, which is a major issue of animal behaviour, is interesting to study in a social life context, as it raises addi­ tional questions about conflict-cooperation trade-oft's. Insect societies have proven particularly open to experimental analysis: one can easily assemble or disassemble them and place them in controllable situations in the laboratory.