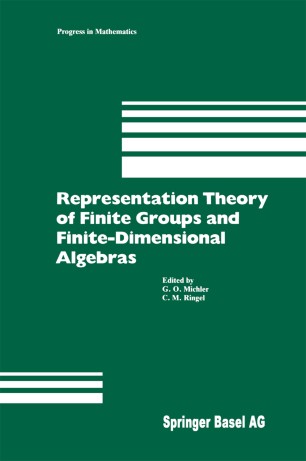 Proceedings of the Conference at the University of Bielefeld from May 15–17, 1991, and 7 Survey Articles on Topics of Representation Theory

Part of the Progress in Mathematics book series (PM, volume 95)

From April 1, 1984 until March 31, 1991 the Deutsche Forschungsgemeinschaft has sponsored the project "Representation Theory of Finite Groups and Finite Di­ mensional Algebras". The proposal for this project was submitted by B. Huppert (Mainz), B. Fischer (Bielefeld), G. Michler (Essen), H. Pahlings (Aachen) and C. M. Ringel (Bielefeld) in order to strengthen the interaction between the different re­ search areas in representation theory. The Deutsche Forschungsgemeinschaft has given many research positions and fellowships for young algebraists enabling them to do research at their own uni­ versities or as visitors at well known research institutions in America, Australia, England and France. The whole project benefitted very much from an extensive exchange programme between German and American scientists sponsored by the Deutsche Forschungsgemeinschaft and by the National Science Foundation of the United States. This volume presents lectures given in a final conference and reports by members of the project. It is divided into two parts. The first part contains seven survey articles describing recent advances in different areas of representation theory. These articles do not only concentrate on the work done by the German research groups, but also inform on major developments of the subject at all. The volume omits those topics already treated in book form. In particular, it does not contain a survey on K.