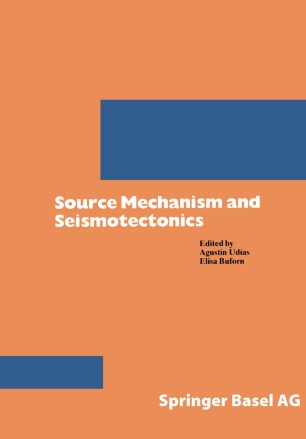 nesus, Armenia, and Georgia have largely profited from the experience acquired in the study of the large events of the early 1980s. The Mediterranean region is not only the site of shallow dispersed seismic activity, it is also the site of localized intermediate depth seismic activity, and of some rare deeper events. Active subduc­ tion is clearly at the origin of Greek intermediate depth seismicity, while the deep activity under Calabria and the Vrancea region in Romania is clearly related to downgoing slabs that have long remained active after the arrest of subduction. The origin of the intermediate and very deep seismicity below Spain is a considerably more complex problem. Several possible explanations of the intermediate depth activity to about 110 km have been proposed, but the origin of the deep (650 km) events studied by BURFORN et a1. remains a mystery since this is the only source of deep activity that is not related in an obvious way to a subduction zone. The problem of seismic source mechanism and seismotectonics cannot be completely separated from that of the mechanical origin of earthquakes. Recent work on this subject has revealed the intimate relation between fault geometry, as observed by field geologists, and the results of inversion of source process from seismic data in the far-field or in the near-field.