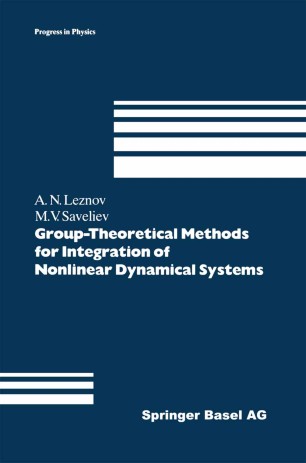 Part of the Progress in Physics book series (PMP, volume 15)

The book reviews a large number of 1- and 2-dimensional equations that describe nonlinear phenomena in various areas of modern theoretical and mathematical physics. It is meant, above all, for physicists who specialize in the field theory and physics of elementary particles and plasma, for mathe­ maticians dealing with nonlinear differential equations, differential geometry, and algebra, and the theory of Lie algebras and groups and their representa­ tions, and for students and post-graduates in these fields. We hope that the book will be useful also for experts in hydrodynamics, solid-state physics, nonlinear optics electrophysics, biophysics and physics of the Earth. The first two chapters of the book present some results from the repre­ sentation theory of Lie groups and Lie algebras and their counterpart on supermanifolds in a form convenient in what follows. They are addressed to those who are interested in integrable systems but have a scanty vocabulary in the language of representation theory. The experts may refer to the first two chapters only occasionally. As we wanted to give the reader an opportunity not only to come to grips with the problem on the ideological level but also to integrate her or his own concrete nonlinear equations without reference to the literature, we had to expose in a self-contained way the appropriate parts of the representation theory from a particular point of view.