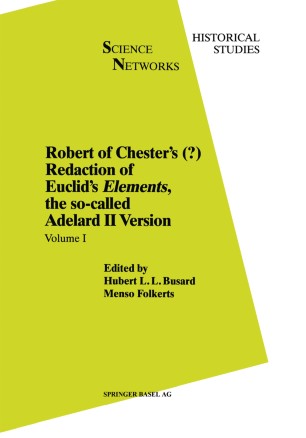 The Latin "Version II", till now attributed to Adelard of Bath, is edited here for the first time. It was the most influential Euclid text in the Latin West in the 12th and 13th centuries. As the large number of manuscripts and the numerous quotations in other scientific and philosophical texts show, it was far better known than the three Euclid translations made from the Arabic in the 12th century (Adelard of Bath, version I; Hermann of Carinthia; Gerard of Cremona). Version II became the basis of later reworkings, in which the enunciations were taken over, but new proofs supplied; the most important text of this kind is the redaction made by Campanus in the late 1250s, which became the standard Latin "Euclid" in the later Middle Ages. The introduction deals with the questions of when and by whom version II was written. Since Marshall Clagett's fundamental article (1953) it has been generally accepted that version II is one of three Euclid texts attributable to Adelard of Bath. But a comparison of the text of version II with those of versions I and III yields little or no reason to assume that Adelard was the author of version II. Version II must have been written later than version I and before version III; its author was acquainted with Euclid texts of the Boethius tradition and with two of those transmitted from Arabic, version I (almost certainly by Adelard) and the version by Hermann of Carinthia.