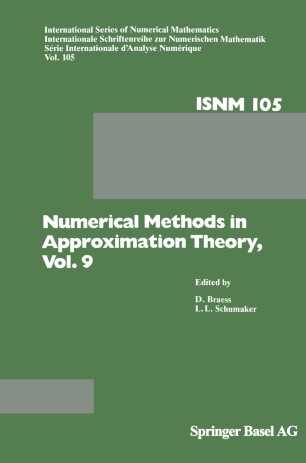 This book is the official proceedings of a conference on Numerical Methods in Approximation Theory which was held at the Mathematisches Forschungs­ institut in Oberwolfach during the week of November 24~30, 1991. It contains refereed and edited papers by 20 of the 49 participants. The book is dedicated to the memory of Prof. Lothar Collatz who main­ tained a long and active interest in numerical approximation. It is the ninth in a series of volumes published by Birkhiiuser resulting from conferences on the subject held at Oberwolfach, and co-organized by Prof. Collatz. We now briefly describe the contents of the book. The paper of BASZEN­ SKI, DELVOS and JESTER deals with blending using sine double series expan­ sions of functions defined on the unit square. In addition to giving explicit error estimates for partial sums and for interpolating sine polynomials, they also show that Boolean sums yield almost the same asymptotic error estimates as the conventional tensor-product approach, but with a reduced number of terms. The paper of BEATSON and LIGHT discusses approximation by quasi­ interpolants which are sums of scaled translates of a one-parameter family of functions. They do not require reproduction of low degree polynomials, but nevertheless are able to give error bounds and analyze quasi-interpolation based on Gaussians and exponentials. BINEV and JETTER deal with multivariate interpolation using shifts of a single basis function. They treat both gridded data and scattered data. As examples, they consider box splines and certain radial basis functions.