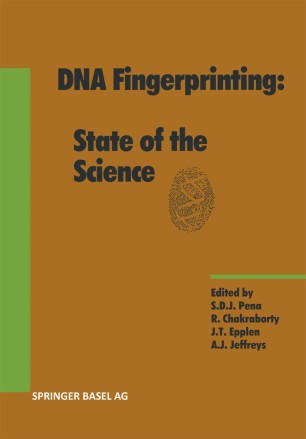 DNA Fingerprinting: State of the Science

DNA fingerprinting had a well-defined birthday. In the March 7, 1985 issue of Nature, Alec Jeffreys and coworkers described the first develop­ ment ofmu1tilocus probes capable of simultaneously revealing hypervari­ ability at many loci in the human genome and called the procedure DNA fingerprinting. It was a royal birth in the best British tradition. In a few months the emerging technique had permitted the denouement of hith­ erto insoluble immigration and paternity disputes and was already heralded as a major revolution in forensic sciences. In the next year (October, 1986) DNA fingerprinting made a dramatic entree in criminal investigations with the Enderby murder case, whose story eventually was turned into a best-selling book ("The Blooding" by Joseph Wambaugh). Today DNA typing systems are routinely used in public and commercial forensic laboratories in at least 25 different countries and have replaced conventional protein markers as the methods of choice for solving paternity disputes and criminal cases. Moreover, DNA fingerprinting has emerged as a new domain of intense scientific activity, with myriad applications in just about every imaginable territory of life sciences. The Second International Conference on DNA Fingerprinting, which was held in Belo Horizonte, Brazil in November of 1992, was a clear proof of this.