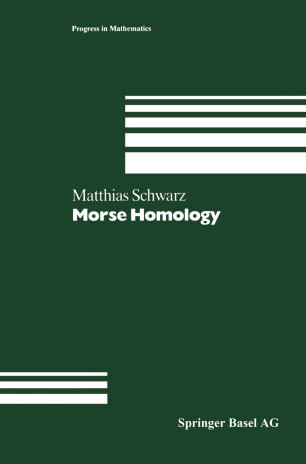 Part of the Progress in Mathematics book series (PM, volume 111)

1.1 Background The subject of this book is Morse homology as a combination of relative Morse theory and Conley's continuation principle. The latter will be useda s an instrument to express the homology encoded in a Morse complex associated to a fixed Morse function independent of this function. Originally, this type of Morse-theoretical tool was developed by Andreas Floer in order to find a proof of the famous Arnold conjecture, whereas classical Morse theory turned out to fail in the infinite-dimensional setting. In this framework, the homological variant of Morse theory is also known as Floer homology. This kind of homology theory is the central topic of this book. But first, it seems worthwhile to outline the standard Morse theory. 1.1.1 Classical Morse Theory The fact that Morse theory can be formulated in a homological way is by no means a new idea. The reader is referred to the excellent survey paper by Raoul Bott [Bol.