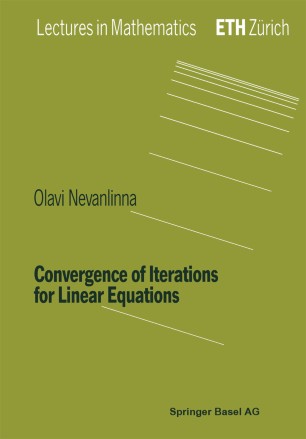 Convergence of Iterations for Linear Equations

Assume that after preconditioning we are given a fixed point problem x = Lx + f (*) where L is a bounded linear operator which is not assumed to be symmetric and f is a given vector. The book discusses the convergence of Krylov subspace methods for solving fixed point problems (*), and focuses on the dynamical aspects of the iteration processes. For example, there are many similarities between the evolution of a Krylov subspace process and that of linear operator semigroups, in particular in the beginning of the iteration. A lifespan of an iteration might typically start with a fast but slowing phase. Such a behavior is sublinear in nature, and is essentially independent of whether the problem is singular or not. Then, for nonsingular problems, the iteration might run with a linear speed before a possible superlinear phase. All these phases are based on different mathematical mechanisms which the book outlines. The goal is to know how to precondition effectively, both in the case of "numerical linear algebra" (where one usually thinks of first fixing a finite dimensional problem to be solved) and in function spaces where the "preconditioning" corresponds to software which approximately solves the original problem.