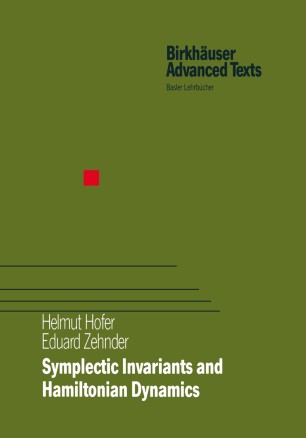 The discoveries of the past decade have opened new perspectives for the old field of Hamiltonian systems and led to the creation of a new field: symplectic topology. Surprising rigidity phenomena demonstrate that the nature of symplectic map­ pings is very different from that of volume preserving mappings which raised new questions, many of them still unanswered. On the other hand, due to the analysis of an old variational principle in classical mechanics, global periodic phenomena in Hamiltonian systems have been established. As it turns out, these seemingly differ­ ent phenomena are mysteriously related. One of the links is a class of symplectic invariants, called symplectic capacities. These invariants are the main theme of this book which grew out of lectures given by the authors at Rutgers University, the RUB Bochum and at the ETH Zurich (1991) and also at the Borel Seminar in Bern 1992. Since the lectures did not require any previous knowledge, only a few and rather elementary topics were selected and proved in detail. Moreover, our se­ lection has been prompted by a single principle: the action principle of mechanics. The action functional for loops in the phase space, given by 1 Fh) = J pdq -J H(t, 'Y(t)) dt , 'Y 0 differs from the old Hamiltonian principle in the configuration space defined by a Lagrangian. The critical points of F are those loops 'Y which solve the Hamiltonian equations associated with the Hamiltonian H and hence are the periodic orbits.