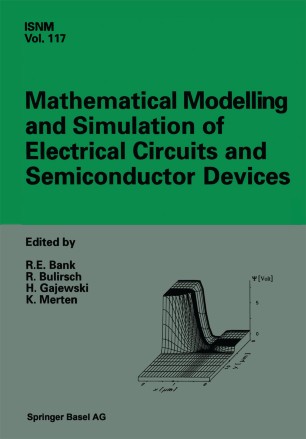 Mathematical Modelling and Simulation of Electrical Circuits and Semiconductor Devices

Proceedings of a Conference held at the Mathematisches Forschungsinstitut, Oberwolfach, July 5–11, 1992

Progress in today's high-technology industries is strongly associated with the development of new mathematical tools. A typical illustration of this partnership is the mathematical modelling and numerical simulation of electric circuits and semiconductor devices. At the second Oberwolfach conference devoted to this important and timely field, scientists from around the world, mainly applied mathematicians and electrical engineers from industry and universities, presented their new results. Their contributions, forming the body of this work, cover electric circuit simulation, device simulation and process simulation. Discussions on experiences with standard software packages and improvements of such packages are included. In the semiconductor area special lectures were given on new modelling approaches, numerical techniques and existence and uniqueness results. In this connection, mention is made, for example, of mixed finite element methods, an extension of the Baliga-Patankar technique for a three dimensional simulation, and the connection between semiconductor equations and the Boltzmann equations.