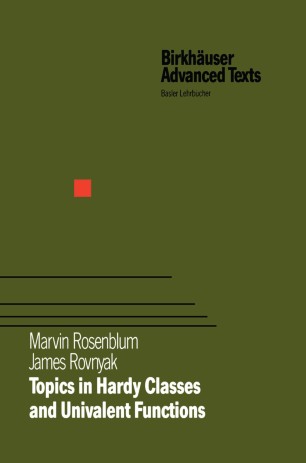 These notes are based on lectures given at the University of Virginia over the past twenty years. They may be viewed as a course in function theory for nonspecialists. Chapters 1-6 give the function-theoretic background to Hardy Classes and Operator Theory, Oxford Mathematical Monographs, Oxford University Press, New York, 1985. These chapters were written first, and they were origi­ nally intended to be a part of that book. Half-plane function theory continues to be useful for applications and is a focal point in our account (Chapters 5 and 6). The theory of Hardy and Nevanlinna classes is derived from proper­ ties of harmonic majorants of subharmonic functions (Chapters 3 and 4). A selfcontained treatment of harmonic and subharmonic functions is included (Chapters 1 and 2). Chapters 7-9 present concepts from the theory of univalent functions and Loewner families leading to proofs of the Bieberbach, Robertson, and Milin conjectures. Their purpose is to make the work of de Branges accessible to students of operator theory. These chapters are by the second author. There is a high degree of independence in the chapters, allowing the material to be used in a variety of ways. For example, Chapters 5-6 can be studied alone by readers familiar with function theory on the unit disk. Chapters 7-9 have been used as the basis for a one-semester topics course.