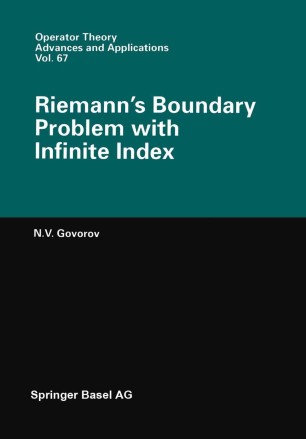 native settlement, in 1950 he graduated - as an extramural studen- from Groznyi Teachers College and in 1957 from Rostov University. He taught mathematics in Novocherkask Polytechnic Institute and its branch in the town of Shachty. That was when his mathematical talent blossomed and he obtained the main results given in the present monograph. In 1969 N. V. Govorov received the degree of Doctor of Mathematics and the aca­ demic rank of a Professor. From 1970 until his tragic death on 24 April 1981, N. V. Govorov worked as Head of the Department of Mathematical Anal­ ysis of Kuban' University actively engaged in preparing new courses and teaching young mathematicians. His original mathematical talent, vivid reactions, kindness bordering on self-sacrifice made him highly respected by everybody who knew him. In preparing this book for publication I was given substantial assistance by E. D. Fainberg and A. I. Heifiz, while V. M. Govorova took a significant part of the technical work with the manuscript. Professor C. Prather con­ tributed substantial assistance in preparing the English translation of the book. I. V. Ostrovskii. PREFACE The classic statement of the Riemann boundary problem consists in finding a function (z) which is analytic and bounded in two domains D+ and D-, with a common boundary - a smooth closed contour L admitting a continuous extension onto L both from D+ and D- and satisfying on L the boundary condition +(t) = G(t)-(t) + g(t).