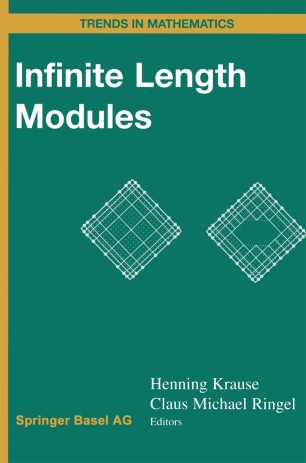 This volume presents the invited lectures of a conference devoted to Infinite Length Modules, held at Bielefeld, September 7-11, 1998. Some additional surveys have been included in order to establish a unified picture. The scientific organization of the conference was in the hands of K. Brown (Glasgow), P. M. Cohn (London), I. Reiten (Trondheim) and C. M. Ringel (Bielefeld). The conference was concerned with the role played by modules of infinite length when dealing with problems in the representation theory of algebras. The investi­ gation of such modules always relies on information concerning modules of finite length, for example simple modules and their possible extensions. But the converse is also true: recent developments in representation theory indicate that a full un­ derstanding of the category of finite dimensional modules, even over a finite dimen­ sional algebra, requires consideration of infinite dimensional, thus infinite length, modules. For instance, the important notion of tameness uses one-parameter fami­ lies of modules, or, alternatively, generic modules and they are of infinite length. If one tries to exhibit a presentation of a module category, it turns out to be essential to take into account the indecomposable modules which are algebraically compact, or, equivalently, pure injective. Specific methods have been developed over the last few years dealing with such special situations as group algebras of finite groups or noetherian rings, and there are surprising relations to topology and geometry. The conference outlined the present state of the art.