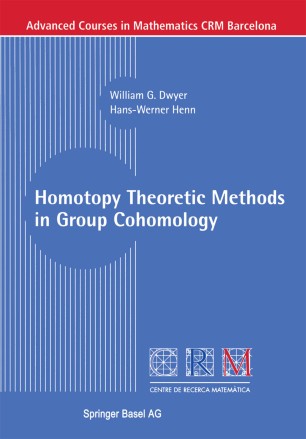 This book consists essentially of notes which were written for an Advanced Course on Classifying Spaces and Cohomology of Groups. The course took place at the Centre de Recerca Mathematica (CRM) in Bellaterra from May 27 to June 2, 1998 and was part of an emphasis semester on Algebraic Topology. It consisted of two parallel series of 6 lectures of 90 minutes each and was intended as an introduction to new homotopy theoretic methods in group cohomology. The first part of the book is concerned with methods of decomposing the classifying space of a finite group into pieces made of classifying spaces of appropriate subgroups. Such decompositions have been used with great success in the last 10-15 years in the homotopy theory of classifying spaces of compact Lie groups and p-compact groups in the sense of Dwyer and Wilkerson. For simplicity the emphasis here is on finite groups and on homological properties of various decompositions known as centralizer resp. normalizer resp. subgroup decomposition. A unified treatment of the various decompositions is given and the relations between them are explored. This is preceeded by a detailed discussion of basic notions such as classifying spaces, simplicial complexes and homotopy colimits.