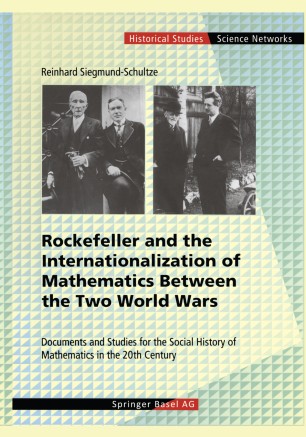 Rockefeller and the Internationalization of Mathematics Between the Two World Wars

Philanthropies funded by the Rockefeller family have been prominent in the social history of the twentieth century for their involvement in medicine and applied science. This book provides the first detailed study of their relatively brief but nonetheless influential foray into the field of mathematics. The careers of a generation of pathbreakers in modern mathematics, such as S.Banach, B.L.van der Waerden and André Weil, were decisively affected by their becoming fellows of the Rockefeller-funded International Education Board in the 1920s. To help promote cooperation between physics and mathematics Rockefeller funds supported the erection of the new Mathematical Institute in Göttingen between 1926 and 1929, while the rise of probability and mathematical statistics owes much to the creation of the Institut Henri Poincaré in Paris by American philanthropy at about the same time. This account draws upon the documented evaluation processes behind these personal and institutional involvements of philanthropies. It not only sheds light on important events in the history of mathematics and physics of the 20th century but also analyzes the comparative developments of mathematics in Europe and the United States. Several of the documents are given in their entirety as significant witnesses to the gradual shift of the centre of world mathematics to the USA. This shift was strengthened by the Nazi purge of German and European mathematics after 1933 to which the Rockefeller Foundation reacted with emergency programs that subsequently contributed to the American war effort. The general historical and political background of the events discussed in this book is the mixture of competition and cooperation between the various European countries and the USA after World War I, and the consequences of the Nazi dictatorship after 1933. Ideological positions of both the philanthropists and mathematicians mattered heavily in that process. Cultural bias in the selection of fellows and of disciplines supported, and the economic predominance of American philanthropy, led among other things to a restriction of the programs to Europe and America, to an uneven consideration of European candidates, and to preferences for Americans. Political self-isolation of the Soviet Union contributed to an increasing alienation of that important mathematical culture from Western mathematics. By focussing on a number of national cultures the investigation aims to represent a step toward a true inter-cultural comparison in mathematics.