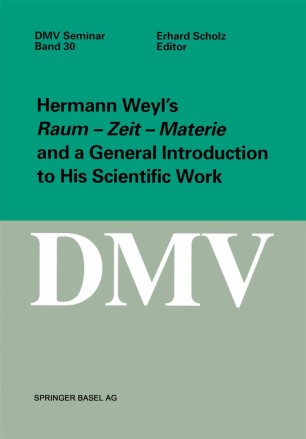 Historical interest and studies of Weyl's role in the interplay between 20th-century mathematics, physics and philosophy have been increasing since the middle 1980s, triggered by different activities at the occasion of the centenary of his birth in 1985, and are far from being exhausted. The present book takes Weyl's "Raum - Zeit - Materie" (Space - Time - Matter) as center of concentration and starting field for a broader look at his work. The contributions in the first part of this volume discuss Weyl's deep involvement in relativity, cosmology and matter theories between the classical unified field theories and quantum physics from the perspective of a creative mind struggling against theories of nature restricted by the view of classical determinism. In the second part of this volume, a broad and detailed introduction is given to Weyl's work in the mathematical sciences in general and in philosophy. It covers the whole range of Weyl's mathematical and physical interests: real analysis, complex function theory and Riemann surfaces, elementary ergodic theory, foundations of mathematics, differential geometry, general relativity, Lie groups, quantum mechanics, and number theory.