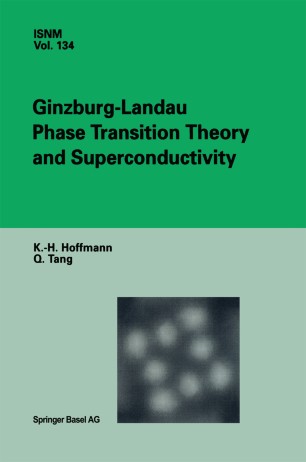 The theory of complex Ginzburg-Landau type phase transition and its applica­ tions to superconductivity and superfluidity has been a topic of great interest to theoretical physicists and has been continuously and persistently studied since the 1950s. Today, there is an abundance of mathematical results spread over numer­ ous scientific journals. However, before 1992, most of the studies concentrated on formal asymptotics or linear analysis. Only isolated results by Berger, Jaffe and Taubes and some of their colleagues touched the nonlinear aspects in great detail. In 1991, a physics seminar given by Ed Copeland at Sussex University inspired Q. Tang, the co-author of this monograph, to study the subject. Independently in Munich, K.-H. Hoffmann and his collaborators Z. Chen and J. Liang started to work on the topic at the same time. Soon it became clear that at that time, groups of mathematicians at Oxford and Virginia Tech had already studied the subject for a couple of years. They inspired experts in interface phase transition problems and their combined effort established a rigorous mathematical framework for the Ginzburg-Landau system. At the beginning Q. Tang collaborated with C.M. Elliott and H. Matano.