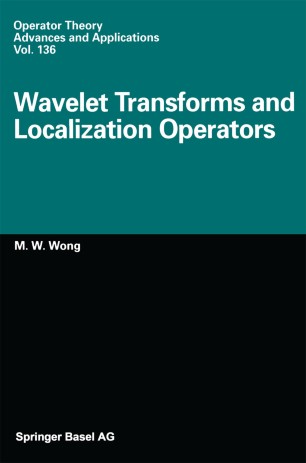 This book is based on lectures given at the Global Analysis Research Center (GARC) of Seoul National University in 1999and at Peking University in 1999and 2000. Preliminary versions of the book have been used for various topics courses in analysis for graduate students at York University. We study in this book wavelet transforms and localization operators in the context of infinite-dimensional and square-integrable representations of locally compact and Hausdorffgroups. The wavelet transforms studied in this book, which include the ones that come from the Weyl-Heisenberg group and the well-known affine group, are the building blocks of localization operators. The theme that dominates the book is the spectral theory of wavelet transforms and localization operators in the form of Schatten-von Neumann norm inequalities. Several chap­ ters are also devoted to the product formulas for concrete localization operators such as Daubechies operators and wavelet multipliers. This book is a natural sequel to the book on pseudo-differential operators [103] and the book on Weyl transforms [102] by the author. Indeed, localization operators on the Weyl-Heisenberg group are Weyl transforms, which are in fact pseudo-differential operators. Details on the perspective and the organization of the book are laid out in the first chapter. This is a book on mathematics and is written for anyone who has taken basic graduate courses in measure theory and functional analysis. Some knowledge of group theory and general topology at the undergraduate level is also assumed.