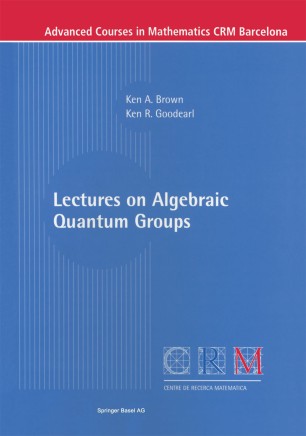 In September 2000, at the Centre de Recerca Matematica in Barcelona, we pre­ sented a 30-hour Advanced Course on Algebraic Quantum Groups. After the course, we expanded and smoothed out the material presented in the lectures and inte­ grated it with the background material that we had prepared for the participants; this volume is the result. As our title implies, our aim in the course and in this text is to treat selected algebraic aspects of the subject of quantum groups. Sev­ eral of the words in the previous sentence call for some elaboration. First, we mean to convey several points by the term 'algebraic' - that we are concerned with algebraic objects, the quantized analogues of 'classical' algebraic objects (in contrast, for example, to quantized versions of continuous function algebras on compact groups); that we are interested in algebraic aspects of the structure of these objects and their representations (in contrast, for example, to applications to other areas of mathematics); and that our tools will be drawn primarily from noncommutative algebra, representation theory, and algebraic geometry. Second, the term 'quantum groups' itself. This label is attached to a large and rapidly diversifying field of mathematics and mathematical physics, originally launched by developments around 1980 in theoretical physics and statistical me­ chanics. It is a field driven much more by examples than by axioms, and so resists attempts at concise description (but see Chapter 1. 1 and the references therein).