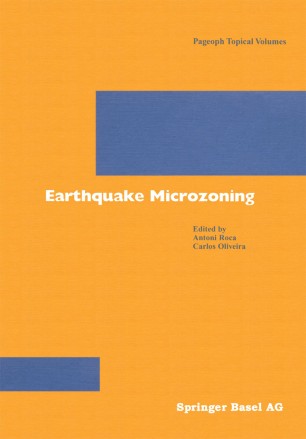 In many past and recent earthquakes it has been shown that the local conditions and, in particular, the local geology have a great influence on the observed seismic ground motion and, consequently, on the damage distribution in housing, industrial stock, and life-lines. Seismic microzoning is the usual procedure to have these local effects taken into account for engineering design and land-use planning, being a useful tool for earthquake risk mitigation. This volume presents a collection of papers mainly originated from a workshop on Seismic Microzoning, organized during the 23rd General Assembly of the European Geophysical Society (EGS) in Nice, France in April 1998. The workshop dealt with various geophysical tools for analysing the effects of the local soils of subsurface geology on seismic ground motion, namely the methods using experimental data such as microtremors, and the theoretical/numerical 1-D and 2-D modelling methods. Additional contributions discussing techniques for characterising soil properties, microzoning applications to several urban areas, and others were added to the volume to broaden this important topic.