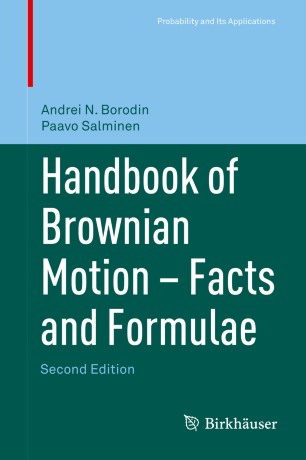 The purpose of this book is to give an easy reference to a large number of facts and formulae associated with Brownian motion. The book consists of two parts. The first one - theory part - is devoted to properties of linear diffusions in general and Brownian motion in particular. Results are given mainly without proofs. The second one - formula part - is a table of distributions of functionals of Brownian motion and related processes. The collection contains more than 2500 numbered formulae.
This book is of value as a basic reference material to researchers, graduate students, and people doing applied work with Brownian motion and diffusions. It can also be used as a source of explicit examples when teaching stochastic processes.
Compared with the first edition published in 1996, this second edition has been revised and considerably expanded. More than 1000 new formulae have been added to the tables and, in particular, geometric Brownian motion is covered both in the theoretical and the formula part of the book.

“This is an extremely useful handbook (...) It is without any previous example in its own subject matter: the very first of its kind. The primary aim of this handbook is to serve as an easily accessible reference for an incredibly large number of facts concerning the distribution of various functionals of Brownian motion and some related stochastic processes.”

"In every respect, this most reliable handbook of Brownian motion and its friends is a volume to cherish. I can highly recommend it to researchers and users of probability alike. The authors are to be congratulated on their great job in bringing all of these facts and fomulas together."

Journal of the American Statistical Association (review of 1st edition)