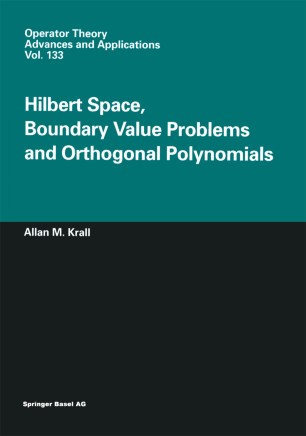 The following tract is divided into three parts: Hilbert spaces and their (bounded and unbounded) self-adjoint operators, linear Hamiltonian systemsand their scalar counterparts and their application to orthogonal polynomials. In a sense, this is an updating of E. C. Titchmarsh's classic Eigenfunction Expansions. My interest in these areas began in 1960-61, when, as a graduate student, I was introduced by my advisors E. J. McShane and Marvin Rosenblum to the ideas of Hilbert space. The next year I was given a problem by Marvin Rosenblum that involved a differential operator with an "integral" boundary condition. That same year I attended a class given by the Physics Department in which the lecturer discussed the theory of Schwarz distributions and Titchmarsh's theory of singular Sturm-Liouville boundary value problems. I think a Professor Smith was the in­ structor, but memory fails. Nonetheless, I am deeply indebted to him, because, as we shall see, these topics are fundamental to what follows. I am also deeply indebted to others. First F. V. Atkinson stands as a giant in the field. W. N. Everitt does likewise. These two were very encouraging to me during my younger (and later) years. They did things "right." It was a revelation to read the book and papers by Professor Atkinson and the many fine fundamen­ tal papers by Professor Everitt. They are held in highest esteem, and are given profound thanks.