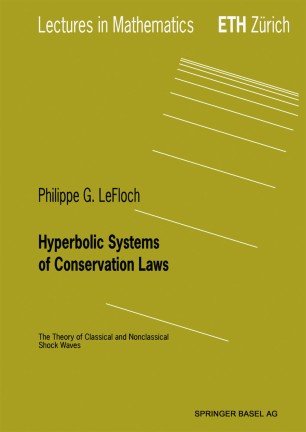 The Theory of Classical and Nonclassical Shock Waves

This set of lecture notes was written for a Nachdiplom-Vorlesungen course given at the Forschungsinstitut fUr Mathematik (FIM), ETH Zurich, during the Fall Semester 2000. I would like to thank the faculty of the Mathematics Department, and especially Rolf Jeltsch and Michael Struwe, for giving me such a great opportunity to deliver the lectures in a very stimulating environment. Part of this material was also taught earlier as an advanced graduate course at the Ecole Poly technique (Palaiseau) during the years 1995-99, at the Instituto Superior Tecnico (Lisbon) in the Spring 1998, and at the University of Wisconsin (Madison) in the Fall 1998. This project started in the Summer 1995 when I gave a series of lectures at the Tata Institute of Fundamental Research (Bangalore). One main objective in this course is to provide a self-contained presentation of the well-posedness theory for nonlinear hyperbolic systems of first-order partial differential equations in divergence form, also called hyperbolic systems of con­ servation laws. Such equations arise in many areas of continuum physics when fundamental balance laws are formulated (for the mass, momentum, total energy . . . of a fluid or solid material) and small-scale mechanisms can be neglected (which are induced by viscosity, capillarity, heat conduction, Hall effect . . . ). Solutions to hyper­ bolic conservation laws exhibit singularities (shock waves), which appear in finite time even from smooth initial data.