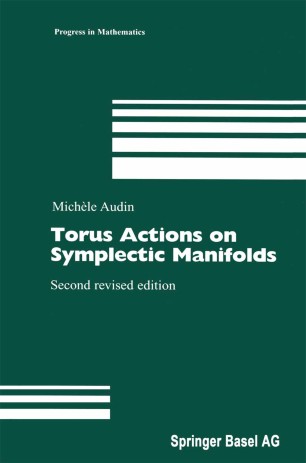 Part of the Progress in Mathematics book series (PM, volume 93)

How I have (re-)written this book The book the reader has in hand was supposed to be a new edition of [14]. I have hesitated quite a long time before deciding to do the re-writing work-the first edition has been sold out for a few years. There was absolutely no question of just correcting numerous misprints and a few mathematical errors. When I wrote the first edition, in 1989, the convexity and Duistermaat-Heckman theorems together with the irruption of toric varieties on the scene of symplectic geometry, due to Delzant, around which the book was organized, were still rather recent (less than ten years). I myself was rather happy with a small contribution I had made to the subject. I was giving a post-graduate course on all that and, well, these were lecture notes, just lecture notes. By chance, the book turned out to be rather popular: during the years since then, I had the opportunity to meet quite a few people(1) who kindly pretended to have learnt the subject in this book. However, the older book does not satisfy at all the idea I have now of what a good book should be. So that this "new edition" is, indeed, another book.