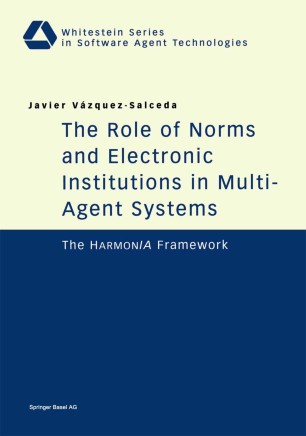 The Role of Norms and Electronic Institutions in Multi-Agent Systems

"It is not the consciousness of men that defines their existence, but, on the contrary, their social existence determines their consciousness." Karl Marx In recent years, several researchers have argued that the design of multi-agent sys­ tems (MAS) in complex, open environments can benefit from social abstractions in order to cope with problems in coordination, cooperation and trust among agents, problems which are also present in human societies. The agent-mediated electronic institutions (e-institutions for short) is a new and promising field which focuses in the concepts of norms and institutions in order to pro­ vide normative frameworks to restrict or guide the behaviour of (software) agents. The main idea is that the interactions among a group of (software) agents are ruled by a set of explicit norms expressed in a computational language representation that agents can interpret. Such norms should not be considered as a negative constraining factor but as an aid that guides the agents' choices and reduces the complexity ofthe environment making the behaviour of other agents more predictable.