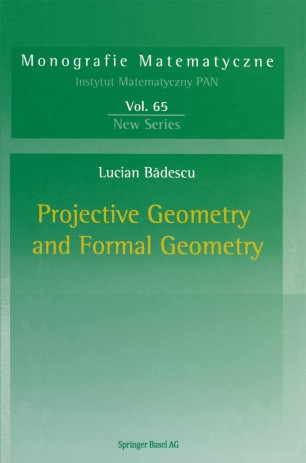 The aim of this monograph is to introduce the reader to modern methods of projective geometry involving certain techniques of formal geometry. Some of these methods are illustrated in the first part through the proofs of a number of results of a rather classical flavor, involving in a crucial way the first infinitesimal neighbourhood of a given subvariety in an ambient variety. Motivated by the first part, in the second formal functions on the formal completion X/Y of X along a closed subvariety Y are studied, particularly the extension problem of formal functions to rational functions.
The formal scheme X/Y, introduced to algebraic geometry by Zariski and Grothendieck in the 1950s, is an analogue of the concept of a tubular neighbourhood of a submanifold of a complex manifold. It is very well suited to study the given embedding Y\subset X. The deep relationship of formal geometry with the most important connectivity theorems in algebraic geometry, or with complex geometry, is also studied. Some of the formal methods are illustrated and applied to homogeneous spaces.
The book contains a lot of results obtained over the last thirty years, many of which never appeared in a monograph or textbook. It addresses to algebraic geometers as well as to those interested in using methods of algebraic geometry.