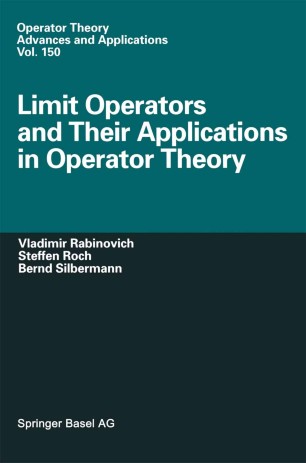 Limit Operators and Their Applications in Operator Theory

This text has two goals. It describes a topic: band and band-dominated operators and their Fredholm theory, and it introduces a method to study this topic: limit operators. Band-dominated operators. Let H = [2(Z) be the Hilbert space of all squared summable functions x : Z -+ Xi provided with the norm 2 2 X IIxl1 :=L I iI . iEZ It is often convenient to think of the elements x of [2(Z) as two-sided infinite sequences (Xi)iEZ. The standard basis of [2(Z) is the family of sequences (ei)iEZ where ei = (. . . ,0,0, 1,0,0, . . . ) with the 1 standing at the ith place. Every bounded linear operator A on H can be described by a two-sided infinite matrix (aij)i,jEZ with respect to this basis, where aij = (Aej, ei)' The band operators on H are just the operators with a matrix representation of finite band-width, i. e. , the operators for which aij = 0 whenever Ii - jl > k for some k. Operators which are in the norm closure ofthe algebra of all band operators are called band-dominated. Needless to say that band and band­ dominated operators appear in numerous branches of mathematics. Archetypal examples come from discretizations of partial differential operators. It is easy to check that every band operator can be uniquely written as a finite sum L dkVk where the d are multiplication operators (i. e.