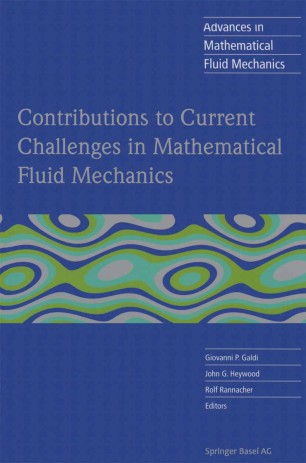 This volume consists of five research articles, each dedicated to a significant topic in the mathematical theory of the Navier-Stokes equations, for compressible and incompressible fluids, and to related questions. All results given here are new and represent a noticeable contribution to the subject. One of the most famous predictions of the Kolmogorov theory of turbulence is the so-called Kolmogorov-obukhov five-thirds law. As is known, this law is heuristic and, to date, there is no rigorous justification. The article of A. Biryuk deals with the Cauchy problem for a multi-dimensional Burgers equation with periodic boundary conditions. Estimates in suitable norms for the corresponding solutions are derived for "large" Reynolds numbers, and their relation with the Kolmogorov-Obukhov law are discussed. Similar estimates are also obtained for the Navier-Stokes equation. In the late sixties J. L. Lions introduced a "perturbation" of the Navier­ Stokes equations in which he added in the linear momentum equation the hyper­ dissipative term (-Ll),Bu, f3 ~ 5/4, where Ll is the Laplace operator. This term is referred to as an "artificial" viscosity. Even though it is not physically moti­ vated, artificial viscosity has proved a useful device in numerical simulations of the Navier-Stokes equations at high Reynolds numbers. The paper of of D. Chae and J. Lee investigates the global well-posedness of a modification of the Navier­ Stokes equation similar to that introduced by Lions, but where now the original dissipative term -Llu is replaced by (-Ll)O:u, 0 S Ct < 5/4.