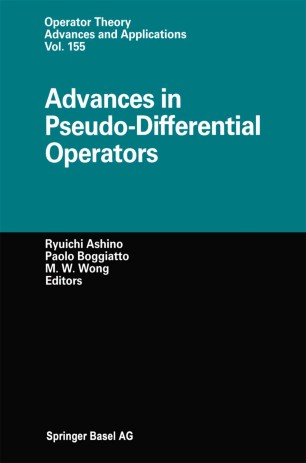 The Fourth Congress of the International Society for Analysis, its Applications and Computation (ISAAC) was held at York University from August 11, 2003 to August 16, 2003. It was supported by the Academic Initiative Fund of the Faculty of Arts, NSERC grants from some members of the Department of Mathematics and Statistics and the Office of the Vice-President Academic of York University. In spite of two SARS outbreaks in Toronto in 2003, the ISAAC Congress was held as scheduled and was well attended by mathematicians from all over the world. There were nine plenary lectures and seventeen special sessions representing most major themes in analysis. Among these were two plenary lectures and a special session on pseudo-differential operators organized by Ryuichi Ashino of Osaka Kyoiku University, Paolo Boggiatto of Universite di Torino and M. W. Wong of York University. In the summer of 2003, M. W. Wong had the idea of putting together the lectures on pseudo-differential operators in a volume to be published in a series that advocates operator theory and its applications. In early August of 2003, when Israel Gohberg of Tel Aviv University was consulted about the possibility of publishing a volume entitled "Advances in Pseudo-Differential Operators" in his series "Operator Theory: Advances and Applications", he replied immediately endorsing the proposal enthusiastically.