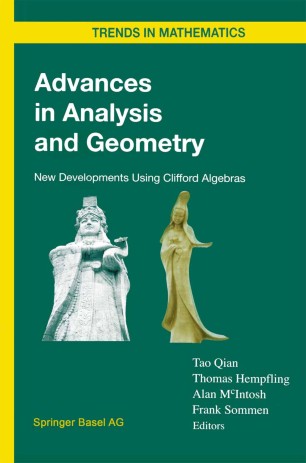 Advances in Analysis and Geometry

On the 16th of October 1843, Sir William R. Hamilton made the discovery of the quaternion algebra H = qo + qli + q2j + q3k whereby the product is determined by the defining relations ·2 ·2 1 Z =] = - , ij = -ji = k. In fact he was inspired by the beautiful geometric model of the complex numbers in which rotations are represented by simple multiplications z ----t az. His goal was to obtain an algebra structure for three dimensional visual space with in particular the possibility of representing all spatial rotations by algebra multiplications and since 1835 he started looking for generalized complex numbers (hypercomplex numbers) of the form a + bi + cj. It hence took him a long time to accept that a fourth dimension was necessary and that commutativity couldn't be kept and he wondered about a possible real life meaning of this fourth dimension which he identified with the scalar part qo as opposed to the vector part ql i + q2j + q3k which represents a point in space.