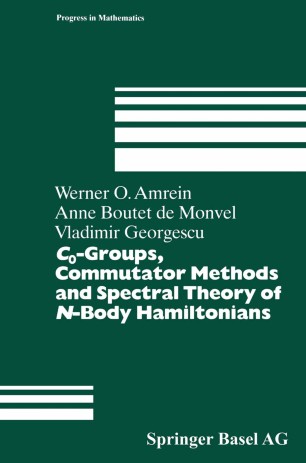 Part of the Progress in Mathematics book series (PM, volume 135)

The relevance of commutator methods in spectral and scattering theory has been known for a long time, and numerous interesting results have been ob­ tained by such methods. The reader may find a description and references in the books by Putnam [Pu], Reed-Simon [RS] and Baumgartel-Wollenberg [BW] for example. A new point of view emerged around 1979 with the work of E. Mourre in which the method of locally conjugate operators was introduced. His idea proved to be remarkably fruitful in establishing detailed spectral properties of N-body Hamiltonians. A problem that was considered extremely difficult be­ fore that time, the proof of the absence of a singularly continuous spectrum for such operators, was then solved in a rather straightforward manner (by E. Mourre himself for N = 3 and by P. Perry, 1. Sigal and B. Simon for general N). The Mourre estimate, which is the main input of the method, also has consequences concerning the behaviour of N-body systems at large times. A deeper study of such propagation properties allowed 1. Sigal and A. Soffer in 1985 to prove existence and completeness of wave operators for N-body systems with short range interactions without implicit conditions on the potentials (for N = 3, similar results were obtained before by means of purely time-dependent methods by V. Enss and by K. Sinha, M. Krishna and P. Muthuramalingam). Our interest in commutator methods was raised by the major achievements mentioned above.