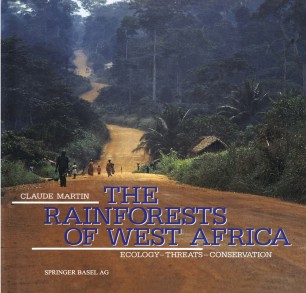 The Rainforests of West Africa

Nowhere eise in the world did industrialized countries leave such early marks in the rainforest as in West Africa. Past and present developments here are in one way or the other significant for rainforests on other continents as weil. West Africa is a pioneer in both a good and a bad sense. This is reason enough to take a closer Iook at the history of moist tropical West Africa. Until recently, no one really seemed to be interested in the rainforests except for a few specialists. The world's scientific community neglected to study the incalculable riches of tropical forests, to make the public aware of them and their due importance. Although interdisciplinary research has been a popular topic for some decades now, it was not applied to just the most complex habitat on earth. Scientists from all fields studied only that which was easiest to record, seemingly blind to a myriad of details awaiting closer examination. Botanists wentabout establishing their herbariums and paid much too little attention to the vegetation as a whole, or to the significance of useful plants for local populations. Zoologists, too, busied themselves with collecting and describing species. Anthropologists, on the other hand, tended to overlook faunal details: in their ignorance of the animal world, they wrote of tigers and deer in Africa. And finally, foresters saw neither the forest nor the trees for the timber - and even confused rainforests with monocultures of fir trees.