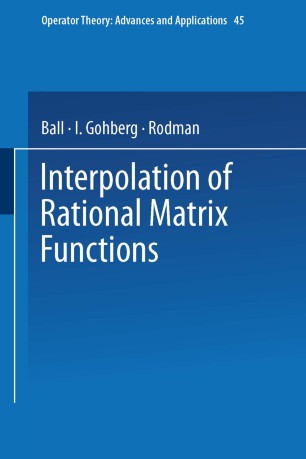 This book aims to present the theory of interpolation for rational matrix functions as a recently matured independent mathematical subject with its own problems, methods and applications. The authors decided to start working on this book during the regional CBMS conference in Lincoln, Nebraska organized by F. Gilfeather and D. Larson. The principal lecturer, J. William Helton, presented ten lectures on operator and systems theory and the interplay between them. The conference was very stimulating and helped us to decide that the time was ripe for a book on interpolation for matrix valued functions (both rational and non-rational). When the work started and the first partial draft of the book was ready it became clear that the topic is vast and that the rational case by itself with its applications is already enough material for an interesting book. In the process of writing the book, methods for the rational case were developed and refined. As a result we are now able to present the rational case as an independent theory. After two years a major part of the first draft was prepared. Then a long period of revising the original draft and introducing recently acquired results and methods followed. There followed a period of polishing and of 25 chapters and the appendix commuting at various times somewhere between Williamsburg, Blacksburg, Tel Aviv, College Park and Amsterdam (sometimes with one or two of the authors).