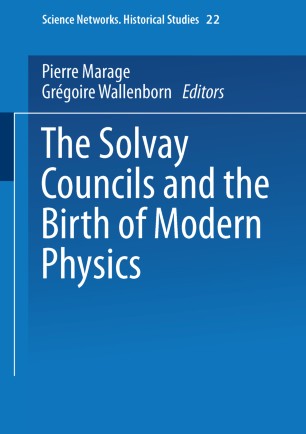 The Solvay Councils and the Birth of Modern Physics

FOREWORD This book came about as a result of two events: an exhibition on the Solvay Physics Councils, held in Brussels in May 1995, and a conference on the same theme which took place at the Free University of Brussels (ULB) on May 1Oth 1995. A book was published in French in conjunction with the exhibition, and much of the present publication is taken from that book. In addition, we have included some of the papers presented at the conference, as we believe they add a further dimension to the history of the Councils. The French term, Conseil Solvay, is usually translated into English as Solvay Conference or Congress. We have elected to retain the particular connotations of the French word Conseil by translating it instead as Council. The Councils were, after all, no ordinary conferences. Only a limited number of participants was invited, hand picked by a scientific committee, who for five to six days took an active part in the sessions and the long discussions that followed. Each day, one or two physicists would present a paper on a subject that had been chosen by the committee to fit in with the overall theme of the Council. The word Conseil expressly implies the gathering of an elite to engage in debate.