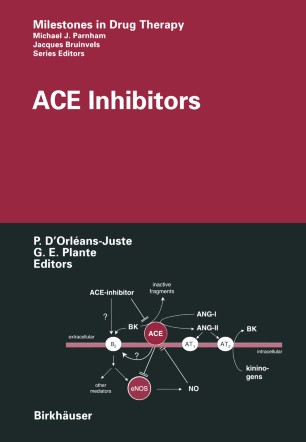 Angiotensin converting enzyme inhibitors (ACEI) represent the first class of antihypertensive agents that was designed and developed on the basis of a well-defined physiopathological axis of arterial hypertension, a vascular dis­ order that is now becoming one of the major causes of morbidity/mortality, not only in developed societies but also in the highly populated developing coun­ tries [1]. CAPTOPRIL, the prototype of the "PRIL" family, which now comprises more than 40 molecule-species, was quite hazardous and the clinical develop­ ment almost failed when serious side-effects were reported in an alarmist fash­ ion in reputable scientific journals, such as the New England Journal of Medicine and Lancet. Squibb & Sons came very close to withdrawing CAPTOPRIL from clinical investigation [2]. However, after re-examination of the data obtained from different categories of patients and appropriate dose-adjustments, the clinical use of CAPTOPRIL turned out to be revolutionary. The prototype, as well as other members of the "PRIL" family became the starting point for numerous basic and clinical research programs, focusing on the interactions of ACEI with the kinin, endothelin, and nitric oxide systems, and the contribution of the receptors for AT I, AT 2, bradykinin Bland B , ETA and ET B to the pharmacological actions 2 of the respective peptides. This research activity led to the development of new pharmacological agents, such as the angiotensin receptor antagonists and, more recently, the neutral endopeptidase inhibitors. In the near future, bradykinin receptor antagonists also will be available to modulate ACEI phar­ macological actions.