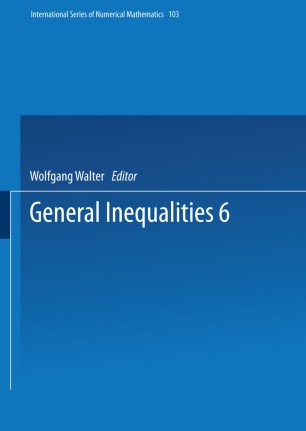 The sixthInternational Conference on General Inequalities was held from Dec. 9 to Dec. 15, 1990, at the Mathematisches Forschungsinstitut Oberwolfach (Black Fa­ rest, Germany). The organizing committee was composed of W.N. Everitt (Birm­ ingham), L. Losonczi (Debrecen) and W. Walter (Karlsruhe). Dr. A. Kovacec ( Coimbra) served cheerfully and efficiently as secretary of the meeting. The con­ ference was attended by 44 participants from 20 countries. Yet again the importance of inequalities in both pure and applied mathematics was made evident from the wide range of interests of the individual participants, and from the wealth of new results announced. New inequalities were presented in the usual spread of the subject areas now expected for these meetings: Classical and functional analysis, existence and boundary value problems for both ordinary and partial differential equations, with special contributions to computer science, quantum holography and error analysis. More strongly than ever, the role played by modern electronic computers was made clear in testing out and prohing into the validity and structure of certain inequalities. Here the computer acts not only for numerical calculations of great complexity, but also in symbolic manipulation of complex finite structures. Prob­ lems in inequalities which even a few years ago were intractable, now fall to solution or receive direct and positive guidance as a result of computer applications. The interface between finite and infinite structures in mathematics and the versatility of modern computers is weil developed in the subject of general inequalities.