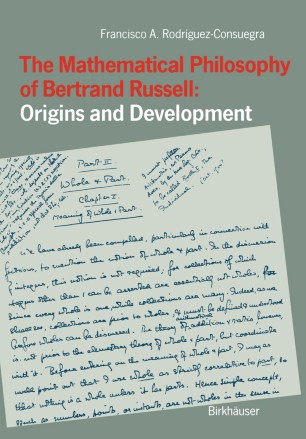 The Mathematical Philosophy of Bertrand Russell: Origins and Development

by Ivor Grattan-Guinness Until twenty years ago the outline history of logicism was well known. Frege had had the important ideas, until he was eclipsed by Wittgenstein. Russell was important in publicising the former and tutoring the latter, and also for working with Moore in the conversion of British philosophy from neo-Hegelianism to the new analytic tradition in the 1900s, but his own work on logic and especially logicism was very muddled. Around that time Russell, who was still alive, sold his manuscripts to McMaster University in Canada, and interest in his achievements in logic began to develop, especially after his death in 1970. Scholars found thousands of folios of unpublished holograph awaiting their attention, and also hundreds of pertinent letters (both in the Russell Archives and elsewhere in certain recipients' collections). Various facets of his work came to light for the first time, and others -which could have been gleaned from carefully reading of the published sources- gained new publicity from the evidence revealed in manuscripts. Even the technical passage work, which constitutes the unread majority of the Principia mathematica (1910-13) of Russell and Whitehead, began to receive a little respectful scrutiny. It turned out that Russell had done several pioneering things. While indeed often incoherent in reference and content, they comprised major forays into the new mathematical logic, of which he turned out to be a major founder: some are even of interest to modem studies.