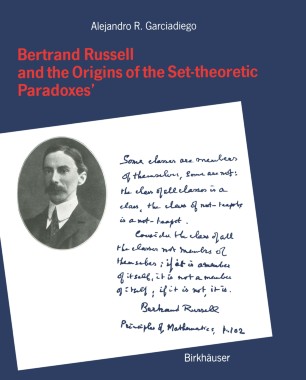 Bertrand Russell and the Origins of the Set-theoretic ‘Paradoxes’

Xll Russell's published works include more than sixty books, several unpublished manuscripts, many hundreds of articles, dozens of radio and TV interviews and films, covering a wide spectrum of knowledge. His writings embrace discussions and analysis of such diverse topics as social sciences, foundations of mathematics, philosophy of physics, philosophy in general, religion, moral sciences, education, pacifism, natural sciences (including biology and physics), linguistics, statistics, probability, eco­ nomic theory, history, politics, international affairs and other topics. He corresponded with a large and diverse group of colleagues including both prominent and obscure figures in politics, the arts, humanities and scienc­ es. Russell's communication with his colleagues began in the late nine­ teenth century and was especially active through much of the twentieth century. In spite of being one of the most controversial public personali­ ties of his day (let us not forget that he went to prison twice, was dis­ missed from Cambridge University and was prevented from teaching at the College of the City of New York), his merits have been recognized and appreciated. He was awarded many medals, diplomas and honors, including the Nobel Prize for Literature in 1950.