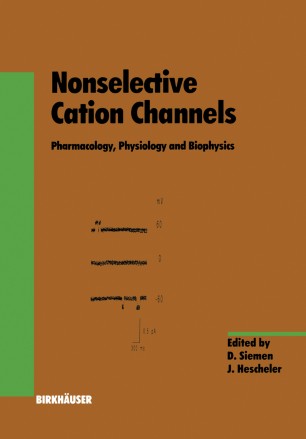 It can be argued that nonselective cation channels were the first sort of ion channel to be described, though the word channel was not used at the time. Their existence was implied by Fatt and Katz in 1952, when they described the action of acetylcholine at the muscle endplate as producing "a large nonselective increase of ion permeability, i.e. a short circuit". Shortly afterwards, in 1956, Katz referred to "aqueous channels through which small ions can pass ... " (del Castillo and Katz, Prog. Biophysics and Biophys. Chern. 6, 121-170). Now, more than thirty years later, it has become clear that there are far more types of nonselective cation channels than anyone could have imagined a few years ago, and that they are found in a vast range of tissues. One has, of course, become quite accustomed to such diversity in, for example, GABA receptors, but this is not quite the same thing. A In the case of GABAA receptor we are talking about a fairly narrow range of structural diversity (resulting largely from differences in subunit composition) within a single type of channel with more-or-Iess well­ defined function. In the case of nonselective cation channels the function is often not known, and relatively few have been cloned. It seems certain though, that they encompass a wide range of quite different structural types.