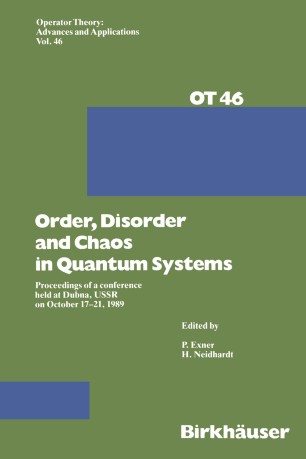 Order,Disorder and Chaos in Quantum Systems

The present volume collects the contributions to the conference "Order, disorder and chaos in quantum systems" which was held at Dubna last October. It is the third meeting in the series started three years ago in which we tried to put together mathematical physicists from the member and non-member countries of JINR with their colleagues from soviet universities and institutes using this international centre as a convenient basis. As in the previous cases, new faces, subj ects and ideas appeared but the spirit remained the same, relaxed and inspirative. Among this conference contributions, a majority should be listed in the "orderly" category. Being more specific, this means mostly various aspects of the theory of Schroedinger operators that has been always a core of quantum mechanics. In spite of the fact that it is studied already for several decades, there are still many interesting problems to solve as some of the lectures collected below witness. At the same time, the theory extends to some new areas motivated by physical problems ; let us mention Schroedinger operators in complicated spatial domains appearing in some parts of solid-state physics or various models using the concept of contact interactions. Our world is far from perfect and to keep a perfect order is difficult not only in everyday life but also in most physical systems. Theoreticians are used to take this fact into account introducing stochastic factors into their considerations.