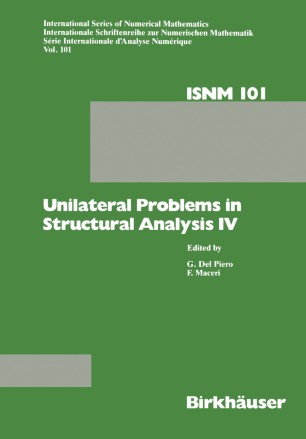 Proceedings of the fourth meeting on Unilateral Problems in Structural Analysis, Capri, June 14–16, 1989

The present Volume contains the contributions to the fourth meeting on Unilateral Problems in Structural Analysis, held at Capri on June 14 to 16,1989. The preceding meetings took place at Villa Emma, near Udine, on May 1982, at Ravello on September 1983 and again at Villa Emma on June 1985. Publication of the proceedings started with the second meeting; the two resulting volumes were published by Springer Verlag, Vienna, under the series Cism Courses and Lectures. Unilateral Problems appear as a singular example of confluence of interests: they are the object of the attention of pure and applied mathematicians, of specialists in Continuum Mechanics and engineers. The idea which gave origin to this series of meetings was that of putting together people coming from such different fields. The result was an extremely fruitful exchange of experiences; it contributed, we believe, to the improvement of the knowledge in the area. The contents of the present Volume reflects the composite character of the meeting. There are contributions in the mathematical theory (Has linger, Panagiotopoulos, Romano), and studies in classical problems of Mechanics such as unilateral contact with friction (Kalker, Klarbring, Licht, Telega), Plasticity (Corradi, Del Piero, Owen) and composite materials and structures (Bruno, Leonardi). Some contributions deal with not yet completely explored questions of unilateral dynamics (Guo, Jean); finally, a contribution (Bennati) concerns the comparatively new subject of masonry structures, in which the unilateral constraint enters at the constitutive level.