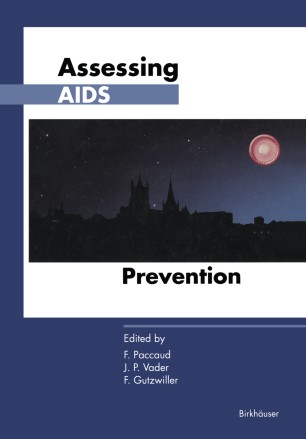 In most countries, primary prevention programmes against the HIV / AIDS epidemic have been implemented. Broadly speaking, three levels of intervention can be identified: - national campaigns directed to the general population; most of them are multi phase campaigns aimed at providing information about HIV transmission and protective behaviour; they use the various mass media channels and are mainly directed to sexual behaviour modifi­ cation; - community-based interventions, addressed to specific target popula­ tions; these populations have been typically selected according to both the high risk of infection (gay men and prostitutes) and the difficulty to reach the members of these communities (intravenous drug users); - individual testing and counselling, often supported by public funds or large non-governmental organizations. Major efforts have been devoted to the development and the implemen­ tation of these preventive programmes, both in terms of human re­ sources and financial support. On the other hand, in most countries, far less energy has been put into the evaluation of these campaigns. This gap is not explained by the fact that evaluation of AIDS/HIV cam­ paigns is a totally new challenge in terms of methodology: there are classical methods, developed over twenty years and used in other fields of prevention.