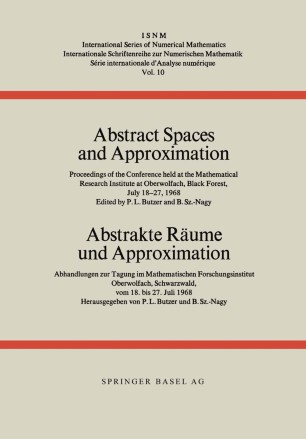 The present conference took place at Oberwolfach, July 18-27, 1968, as a direct follow-up on a meeting on Approximation Theory [1] held there from August 4-10, 1963. The emphasis was on theoretical aspects of approximation, rather than the numerical side. Particular importance was placed on the related fields of functional analysis and operator theory. Thirty-nine papers were presented at the conference and one more was subsequently submitted in writing. All of these are included in these proceedings. In addition there is areport on new and unsolved problems based upon a special problem session and later communications from the partici­ pants. A special role is played by the survey papers also presented in full. They cover a broad range of topics, including invariant subspaces, scattering theory, Wiener-Hopf equations, interpolation theorems, contraction operators, approximation in Banach spaces, etc. The papers have been classified according to subject matter into five chapters, but it needs little emphasis that such thematic groupings are necessarily arbitrary to some extent. The Proceedings are dedicated to the memory of Jean Favard. It was Favard who gave the Oberwolfach Conference of 1963 a special impetus and whose absence was deeply regretted this time. An appreciation of his li fe and contributions was presented verbally by Georges Alexits, while the written version bears the signa­ tures of both Alexits and Marc Zamansky. Our particular thanks are due to E.