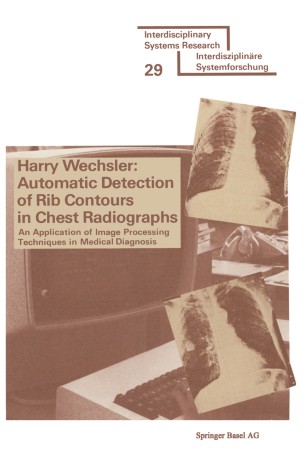 An Application of Image Processing Techniques in Medical Diagnosis

1.1 Statement of the Problem This work describes a new and effective computer algorithm for detecting the contours of ribs in ehest radiographs. The problem, which is common to both the research areas of Machine Vision and Biomedical Computing, is to extract graphical information, such as that represented in Figure 1-lb, from a picture such as Figure 1-la. Figure 1-la shows a typical posterior-anterior (PA) ehest radiograph while Figure 1-lb shows a drawing of the ventral aspect of the thorax. lt is hoped that this researchwill contribute significantly toward developing an automated system for interpreting ehest radio­ graphs. 1.2 Why Have We Carried Out This Research? Since about one-third of the 650,000,000 medical radiographs (X-ray photographs) taken annually in the United States areehest radiographs, there is a growing awareness of the need for a computer­ aided system to help diagnose these radiographs. The detection of rib contours is, of course, a necessary element in such a system. In addition to being able to accommodate the need for a mass screening program, an automated systemalso has the ability to detect anomalies at earlier stages. Ziskin et al (1971) state that reliable 2 {a) Original Chest Radiograph Figure 1-1. A Chest Radiograph 3 VENTRAL CONTOUR CARTILAGE {b) THE THORAX; VENTRAL ASPECT OF A CHEST RADIOGRAPH Figura 1-1 A CHEST RADIOGRAPH studies indicate that even under routine conditions radiologists fail to detect approximately 30% of abnormalities in ehest X-ray films.