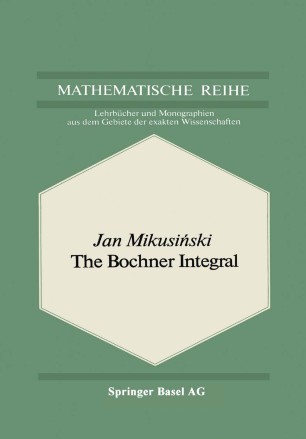 The theory of the Lebesgue integral is still considered as a difficult theory, no matter whether it is based the concept of measure or introduced by other methods. The primary aim of this book is to give an approach which would be as intelligible and lucid as possible. Our definition, produced in Chapter I, requires for its background only a little of the theory of absolutely convergent series so that it is understandable for students of the first undergraduate course. Nevertheless, it yields the Lebesgue integral in its full generality and, moreover, extends automatically to the Bochner integral (by replacing real coefficients of series by elements of a Banach space). It seems that our approach is simple enough as to eliminate the less useful Riemann integration theory from regular mathematics courses. Intuitively, the difference between various approaches to integration may be brought out by the following story on shoemakers. A piece of leather, like in Figure 1, is given. The task consists in measuring its area. There are three shoemakers and each of them solves the task in his own way. A B Fig. 1 The shoemaker R. divides the leather into a finite number of vertical strips and considers the strips approximately as rectangles. The sum of areas of all rectangles is taken for an approximate area of the leather (Figure 2). If he is not satisfied with the obtained exactitude, he repeats the whole procedure, by dividing the leather into thinner strips.