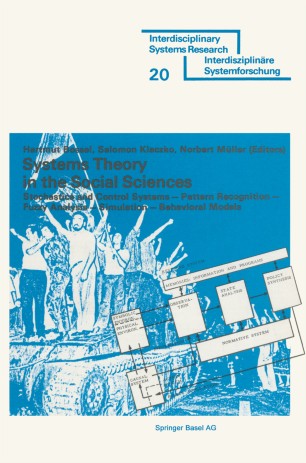 Systems Theory in the Social Sciences

In an ever more complex and interrelated world, a better understanding of social systems and of the dynamics of their behavior is of crucial im­ portance. Many of the tools holding promise of potentially significant contributions to the analysis of social systems have been, or are being developed outside of the social sciences proper, mostly the loose collec­ tion of diverse scientific approaches called' systems science' or , systems theory' . The editors - all of whom are involved in social systems analysis - have made an attempt in this volume to pull together several aspects of systems science which appear to them to be of particular relevance to the study of social systems: Control systems, stochastic systems, pattern recog­ nition, fuzzy analysis, simulation, and behavioral models. 29 authors from the disciplines of sociology, social psychology, political science, management science, history, behavioral science, economics, mathematics, engineering, and systems science have contributed to this truly interdis­ ciplinary effort. All of them have made the attempt to write in a manner understandable by the non-specialist. It is hoped that this volume will be of particular usefulness to students in the social sciences. Most of the articles are too short to provide much more than an initial stimulation. We trust that the references provided by the authors will allow deeper penetration into particular areas.