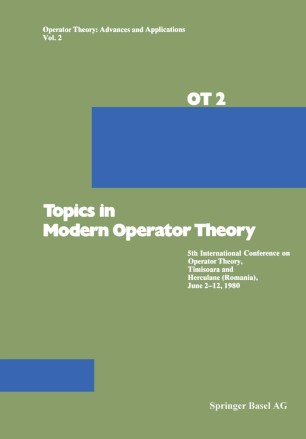 The first of the annual Operator Theory conferences in Ti­ mi~oara held four years ago was a meeting of operator theory spe­ cialists from the National Institute for Scientific and Techni­ cal Creation in Bucharest and from the University of Timi~oara. Since then, the participation to these conferences has greatly increased, by being attended first by operator theorists from allover the country and (since 1978) by an increasing number of foreign mathematicians. Thus the 1980 Conference can be regarded as a truly international Operator Theory meeting, fifteen coun­ tries being represented at it. These conferences are conceived as a means to promote the cooperation between specialists in all areas of Operator Theory. Among the main topics in 1980 were: dilation theory, invariant subspaces, connections with the theory of cX-algebras, subnormal operators, multidimensional functional calculus etc. Though not included in this volume, we would like to mention that in 1980 some special sessions concerning other fields of Functional Ana­ lysis were organized at the Operator Theory conference. The research contracts of the Department of Mathematics of INCREST with the National Council for Sciences and Technoloa,y of Romania provided the means for developping the research activi­ ty in Functional Analysis; these contracts constitute the gene­ rous framework for these meetings.