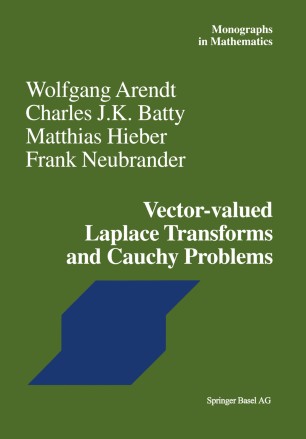 Part of the Monographs in Mathematics book series (MMA, volume 96)

Linear evolution equations in Banach spaces have seen important developments in the last two decades. This is due to the many different applications in the theory of partial differential equations, probability theory, mathematical physics, and other areas, and also to the development of new techniques. One important technique is given by the Laplace transform. It played an important role in the early development of semigroup theory, as can be seen in the pioneering monograph by Rille and Phillips [HP57]. But many new results and concepts have come from Laplace transform techniques in the last 15 years. In contrast to the classical theory, one particular feature of this method is that functions with values in a Banach space have to be considered. The aim of this book is to present the theory of linear evolution equations in a systematic way by using the methods of vector-valued Laplace transforms. It is simple to describe the basic idea relating these two subjects. Let A be a closed linear operator on a Banach space X. The Cauchy problern defined by A is the initial value problern (t 2 0), (CP) {u'(t) = Au(t) u(O) = x, where x E X is a given initial value. If u is an exponentially bounded, continuous function, then we may consider the Laplace transform 00 u(>. ) = 1 e-). . tu(t) dt of u for large real>. .